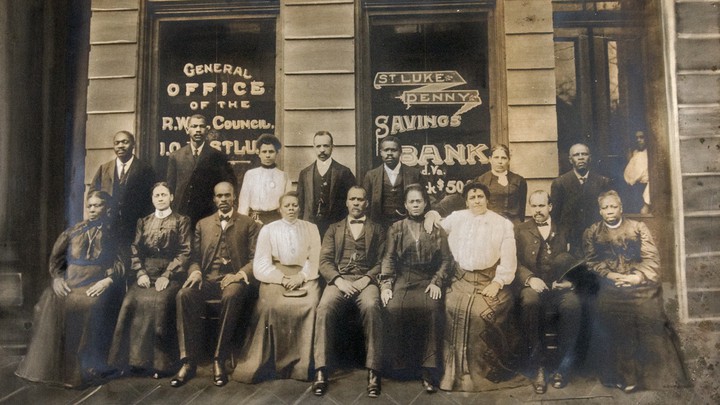 In 1921, the Greenwood district neighborhood of Tulsa, Oklahoma, was the site of one of the most devastating massacres in the entire history of United States. It was a massacre so ghastly, many chose to forget it and it was hidden from textbooks and even oral histories for decades. As we struggle today to understand contemporary violence against African Americans, it’s especially important to know this history and to try to understand what happened.

Known as “Black Wall Street” to those in the community, Greenwood in the early part of the 20th century was a thriving business district featuring African-American owned businesses, a strong black middle and upper class, schools, hospitals, and theaters. It was a bustling commercial and social “island” on the Northeast side of Tulsa, Oklahoma.

In just two days in the Spring of 1921, however, it was all destroyed. Put in today’s terms, there was $30 million in damage, from fifty-five to 400 killed, 800 injured; family fortunes had evaporated overnight. Many accounts of the demise of Black Wall Street refer to it as a “race riot,” but nothing could be further from the truth. It is better described as a terrorist attack on an affluent black neighborhood. The armed black men involved were defending their homes, their businesses, and their lives.

Oklahoma, rich in oil deposits, became a state in 1907. It offered a promise of a better life for many formerly enslaved African Americans looking for a chance to start over and get away from the still-repressive Southern states.

In Tulsa, the Frisco railroad tracks divided the “white” part of town from the Greenwood District, called “Little Africa.” Laws prevented both whites and blacks from living in neighborhoods that were 75 percent the other race, so segregation “naturally” fell into place.

Red brick buildings sprang up along Greenwood Avenue, occupied by businesses owned by a thriving black middle class that only grew during an oil boom in the 1910s. Theaters, night clubs, churches, grocery stores thrived in the Greenwood District. The schools were superior to those of the white areas, and many of the houses had indoor plumbing before those in the white areas did.

Because African Americans couldn’t shop in areas that were predominately white, a lot of money spent in Greenwood went right back into the community. By the time of the attacks on the citizens of Black Wall Street, there were more than 10,000 African Americans living in the area. The community supported two of its own newspapers, the Tulsa Star and the Oklahoma Sun—the second covering state and national news and politics as well.

But as the community flourished, disgruntlement and hatred did as well. The country was still reeling from the failed Reconstruction and furiously enacting Jim Crow laws. A number of African American men in other parts of the United States had been accused of sexual attacks on white women, and were subsequently put to death—usually at the hands of a lynch mob. The Ku Klux Klan had approximately 2,000 members in the Tulsa area by the end of 1921. With veterans returning from World War I and jobs becoming more scarce, envy and racial tension grew among some white citizens of Tulsa.

Over the course of sixteen hours, almost every business—each hotel, both hospitals, libraries, the newspapers, and doctor’s offices— were burned to the ground. Police detained and arrested 6,000 of the 10,000 African Americans who lived in the Greenwood District. 9,000 of them were left homeless.  Thirty-five city blocks comprised of 1,256 residences were razed. In today’s terms, it was the equivalent of $30 million in damage.

Estimates of the dead vary, from fifty-five to 300, but several prominent black businessmen and doctors—including A.C. Jackson, recognized as one of the best surgeons of his time by the Mayo brothers—were killed. Jackson was shot after he surrendered to some of the mob to protect his family and was being taken to the jail. Nobody was ever found guilty of his murder.

It’s never been fully settled exactly what happened between a black man named Dick Rowland, a shoe shine, and Sarah Page, an elevator operator at the Drexel Building in downtown Tulsa, but some of the few people working on May 30, 1921—Memorial Day–heard a scream and then saw Rowland rushing away from the building. There is speculation that the two were lovers, something that would have gotten both into serious trouble, but nothing was ever confirmed. What is clear is that her scream was interpreted as a sign that Rowland “assaulted” her. It was a claim which she denied to the police upon being questioned.

What did happen was that the afternoon paper, the Tulsa Tribune, ran the headline, “Nab Negro For Attacking Girl In An Elevator.” The local police, aware that such an allegation could mean Rowland would fall victim to a lynch mob, took Rowland into protective custody at the top floor of the Tulsa County Courthouse.

Word spread and soon hundreds of whites gathered outside of the courthouse with guns and torches. Bews of a potential lynching hit the Greenwood District, and several of the black veterans of World War I who had weapons at home went and gathered them. Thirty African American men headed toward the jail, weapons in hand, intending to prevent Rowland’s demise. They offered to help the sheriff defend Rowland from the mob; but he declined—probably aware that the entire scene was about to explode.

The white mob outside the jail swelled to 2,000, many of them bringing arms from their houses. More black men arrived later that evening in automobiles, weapons at the ready. At 10 p.m., in an apparent scuffle between a sheriff’s deputy and one of the armed black men, shots rang out and then, as many eyewitnesses stated, “All hell broke loose.” Soon ten white men and two black were lying dead in the street. 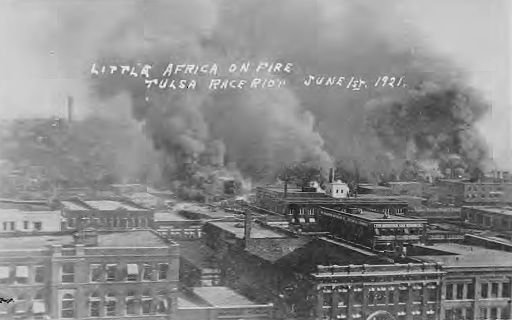 The armed black men backed up to defend Greenwood but being vastly outnumbered they took to the heights of nearby buildings and residences and began shooting from above. The mob then began to set fire to the buildings and houses in the Greenwood district, and refused to allow firefighters to extinguish the blazes—at gunpoint. Skirmishes, drive-by shootings, and outright murders occurred throughout the night, as more buildings caught fire. Some of Greenwood’s African American citizens fled on foot for fear of their lives.

By mid-day on June 1, all that was left were ashes, bodies, and still-burning neighborhoods. National Guard troops arrived, and with the declaration of martial law, the chaos came to a halt.

6,000 African American men were rounded up by troops and released only after being vouched for—by a white person, or employer. The rest were jailed.

No white Tulsan was ever arrested or tried. The blame for the destruction was put squarely onto the residents of Greenwood. Much like in Ferguson, MIssouri almost 100 years later, the Tulsa police department took no responsibility. That said, a few members of the department had put themselves at great risk by keeping Rowland from being lynched.

Even after the embers cooled and the dead were buried the racial violence continued. Tulsa’s white leaders worked to keep Greenwood from being rebuilt. Ordinances were passed to prevent homes from being rebuilt in the district. There was talk of rebuilding the district as an industrial center, and relocating blacks to an area much further from downtown.

African American lawyers won an injunction to stop that from happening, and many residents did rebuild, although most of them without any insurance money, since insurance companies could refuse to pay damages from riots. Greenwood’s rebuilt district actually flourished, until, in the 1950s two major interstate highways and “urban renewal” efforts pushed almost all of the black residents out of the district and further north.

To this day, even including the 1985 MOVE bombing in Philadelphia, this remains the single largest massacre of African American citizens in the history of the United States. Black Wall Street stands as just one example, if a dramatic one, of the kinds of events that stain our history and have perpetuated racial inequity in the United States.